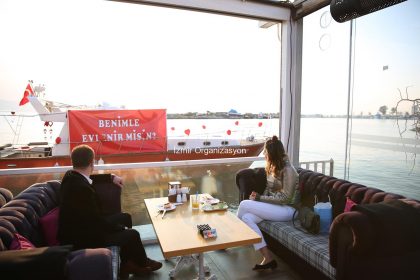 Organization of Marriage Proposal on Cafe-Out Yacht; İzmir is one of the organizations where you have just signed your love with the sounds of seagulls that we have prepared with our expert team and where sky and drone shooting meet. It is possible to get lost in the blue of the sea with your beloved coffee accompanied by the fragrant coffee you drink with the elite people of Bostanlı. It is perhaps the only marriage proposal organization that can go to a cafeteria where the smell of iodine with its serene wave sound, wind, algae smell and the feeling of relaxation goes to the skin and catch the excitement in the eyes of your loved one. Mr.Fikret, his girlfriend Dilge, who lives in Eskişehir, felt that it was time to ask him the question, “Will you marry me?

On the morning of the day she was going to propose to Miss. Dilge, Mr.Fikret  contacted one of our teammates,  Mr.Fikret, and gave her details with preparation details. After the rainy days, the sun opened in mid-February as if it had given us as a gift Saturday. About four hours before the time of the event, our teammates who took their places on the boat on which the Marriage Proposal Organization on the Cafe Exit Yacht will be held started their preparations with care.

First of all, the interior decor of the boat, where our couple will spend time alone, has started to be decorated. In order to create a symbolic path to the dining table inside the boat, red lanterns with waxes were placed inside. Glazed lanterns decorated with red stones were placed around. The lanterns were decorated with hearted otrishes. Then, red-hearted decors were hung on the ceilings of the cabin, symbolizing the meaning and importance of the day.

Then a special decorative corner was made in front of the section where our couple would sit. Even the pictures of their beloved dogs named Teddy were hanged. Then, our couple’s treats, snack plates, chips plates, fruit and cheese plates were placed. The pictures of the Miss Dilge and Mr. Fikret pairs were placed under the transparent glass plate in the middle of the table. Champagne and champagne glasses were placed on their tables to celebrate this important decision of Miss Dilge and Mr.Fikret. Then the boat began to decorate the exterior of the boat and red-hearted balloons were connected to the railings. Red carpet was laid on the entrance road where our couple was taken from the cafeteria by VIP vehicle and the visuality was increased. On both sides of the red carpet parallel to each other lighthouse lanterns were placed inside.

Between the two lighthouses was arranged to coincide with a ground volcano. As the boat will take an hour long tour of the bay, the bride candidate Miss Dilge was filled with red-hearted balloons with helium and the ends were tied with raffia. Now all preparations were completed and the whole team was waiting for Miss Dilge and Mr.Fikret . On the morning of the day of the wedding proposal on the café departed, Fikret Bey contacted our friend, Mr.Fikret, who stated that we were ready and took a position to indicate exactly where we are. 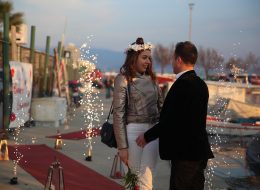 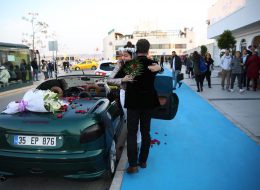 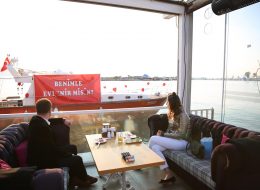 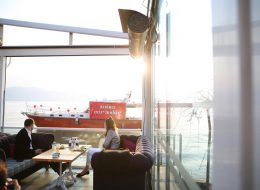 Mr.Fikret and his girl friend Miss Dilge Bostanlı pier, as an excuse to drink coffee as an ordinary day had invited the day before. Our follow-up photographer and cameraman friends were recording Miss Dilge who was unaware. In addition, the drone camera, which put the cafeteria into the shooting area, was at the scene.

While our young couple were drinking their coffees, our motor yacht boat slowly approached the shore and after taking a tour accompanied by implicit sentences such as ac I wonder who this boat is for here ““ Here we invite them to the boat here for Miss Dilge and  Mr.Fikret. He stood up and hugged each other. Of course, the screams of Miss Dilge united with joy. Accompanied by other people sitting in the cafe waiting for them in front of the cafeteria couple, cabriolet decorated with red roses moved towards the boat with VIP transfer.

Cabriolet VIP car with Miss Dilge and Mr.Fikret from the front of the boat as soon as the couple stepped on the red carpet began to burn the ground volcanoes. While Miss Dilge was experiencing moments of emotion, Mr.Fikret took the ring box to her knees and asked the question, “WILL YOU MARRY ME? ”. Miss Dilge’s reply was quick,, YES ”. Then, our young couple opened up to the blue waters of the bay accompanied by our cameraman and photographer, who made the young couple immortalize this special day. While celebrating this special decision while making a tour of the Gulf of Izmir to celebrate the young couple exploded their champagne to the fullest enthusiasm. Miss Dilara also brought the balloons to the sky.

Spending an hour in the pleasant waters of the sea, all of our delightful pictures were taken by our photographers, drone shooting cameras and cameramen and archived for the preparation of their special clips. We wish our young couple a lifetime of happiness. 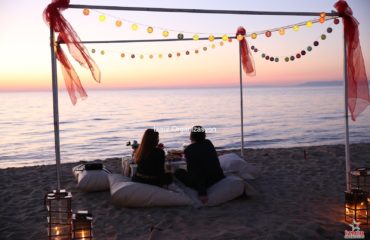 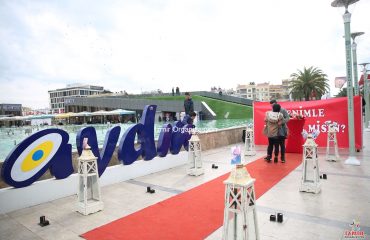 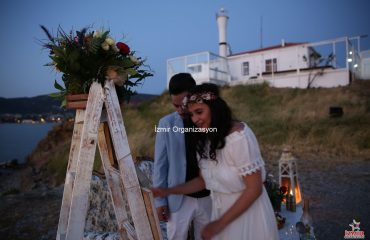