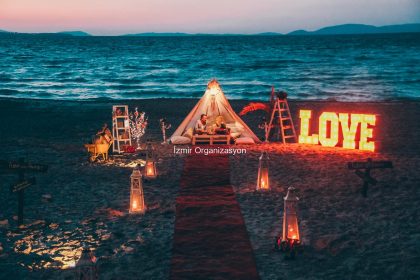 Çeşme is the most colorful and entertaining area of the Aegean. The beaches of Çeşme, where the sun is smiling, can see beautiful beaches lined up in rows along the 29-kilometer coastline. If you have a long holiday you can spend your time at another beach every day. It makes you feel like you’re in a fairy tale with its rare golden yellow sands, the sea that turns blue from navy blue, and the wind blowing all the time from the overwhelming heat of summer. Even in the first months of spring, the yellow of the sun mixes with the heat of the beach that strikes your face and creates a distinctive yakamoz. We, as İzmir Organization, carried the Native American tent, which we have used many times before, to this unique beach.

Dreamlike Proposal on the Beach

An object with a very fairy tale name called “Dreamcatcher”. Dream trap, a red-skinned belief that is thought to prevent nightmares. It would be more appropriate if he kept the dreams that we wanted, loved and chosen and let us see again and again whenever we wanted. According to Native American belief, a dreamcatcher that captures bad dreams; The dream catcher, which hangs on the wall of the Indians, protects them from the realization of nightmares.

Marriage Proposal couples are not full of nightmares, but we believe in the step to better days. (dream trap) and immediately put a new one in place. It is also known as the circle of life and is made of willow. Marriage proposal on the beach in accordance with the concept to make earrings, pendants. etc. as a motif is used. You can even buy gifts for that day.

We have moved to Çeşme beach this time because the Summer Marriage Proposal Organizations, which we have designed a few examples previously in the beach, forest and rural areas. This beautiful tent concept, which attracts incredible attention, looks like a new era. Mr. Ahmet, who lives in İzmir with his girlfriend Miss Tuğba  wanted to unite his life with this beautiful decision to realize an extraordinary marriage proposal.

However, for Mr.Ahmet’s girlfriend  Miss Tuğba, the marriage proposal should have been something very different. As İzmir Organizasyon team, we presented the images of Dream Catcher on the Beach, which is our new decoration which is decorated with extraordinary illuminated decors.

Mr.Ahmet’s  reactions were very good and we received good feedback on the Dream Trap Marriage Proposal Organization on the beach. This time we turned our route not to the country garden but to Çeşme beach which is one of the most beautiful coastal strips of İzmir. Hours are numbered and days passed quickly for Mr. Ahmet, as the İzmir Organizasyon team, we were eagerly looking forward to establishing our new installation, Dream Trap on the Beach. 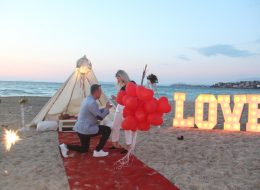 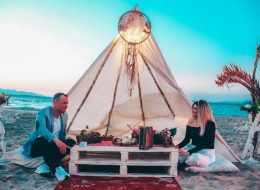 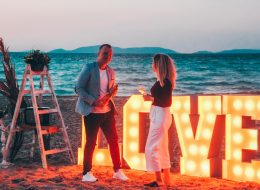 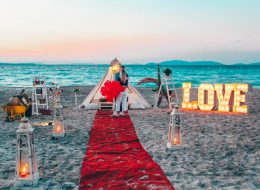 The weather is closed in mid-April but there is no rain. Even though the romantic but windy conditions of this atmosphere would force our team, we were excited. We came to the organization area with our 8 professional team. The leaves falling from the trees around the beach formed a separate decor for the marriage proposal organization. We found ourselves a large beach area and started the installation for our fresh couple Tuğba and Ahmet. We set our sights on retro and Native American traditions and began to blend the wonderful images that the sea gave us. First of all, we have created the entrance way of our young couple. With large log trays and oil lamps, we laid a red straw in the middle of the beach and at the entrance to the area.

Then Tuğba and Ahmet will spend time to set up a triangular tent. We went out of the Native American beliefs of course, in terms of appointments, exile and hunting season, they can be disassembled in a very short time and turned into a very practical transport vehicle in disassembled condition, can be re-established in a very short time, they can reach huge dimensions and they can reach enormous dimensions almost everywhere in the world. used to make a wonderful practical marriage proposal housing rolled up sleeves.

The special water crows were fixed to the tent with thick anchors so that they would not fall to the ground or fall over. Then the special cover of the tent was stretched over the crows, giving a triangular appearance with the tarpaulin cover woven with fine strand yarns. Then we added lighting to the tent and, of course, the symbol of the dream trap, which is named after our tent, based on tradition. We put poplin patterned cushions and short wooden coffee table in this fresh tent.

Then, we prepared a personalized snack presentation of Tuğba and Ahmet couple with four kinds of snacks. We put our chilled champagne and glasses on the table for this special day. In order not to leave the retro line, we decorated the jars with marble lace and white lace. Thus, we would get an image like fireflies that could leak out of a fabric that resembles a transparency gauze but is woven more often, bleached and soft-touched. Decors were gathered in the middle of the walkway and we made tiny ornament touches that reflect the marriage proposal organization in order not to go out of the event.

Sound and light system was carefully installed and tried again before our young couple came. The first target that will stand out in this exterior decor is our illuminated letter signs consisting of four main letters which can be used in any color of special wood. After supporting the installation and making our own “LOVE”, which puts itself out at sunset, I came here for small decors. In the middle of our Indian tent and the giant “LOVE” inscription we placed our metal tree with pictures of our couple. On the other side we aligned the short walkway signs with a white worn bicycle in front of the walkway as if to welcome. We revived the white bike with white buckets and floor lighting in order not to contradict the colors. 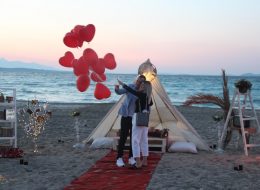 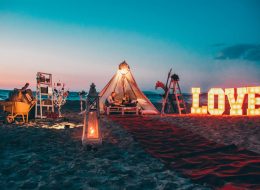 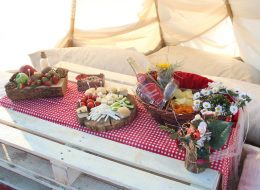 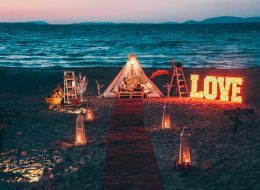 Drone shooting application also took part in this marriage proposal organization found on the beach. Our cameraman friend carefully drew detailed detail before the arrival of the couple. MissTuğba inflated with helium gas, raffia reflecting the metallic color of the ends connected to the heart carefully prepared and delivered to Miss Tuğba to be given to the lady at the entrance. Repeated checks were made for photo and camera shots and all our team members took their places. We were ready for the Dream Trap Marriage Proposal Organization on the beach, and believe us, we were much more excited than Tuğba and Ahmet.

As of the day for the marriage proposal organization, our friend who is in constant contact with Mr.Ahmet, has informed him that the preparations are over and that the time we have decided is coming. Our cameraman friend, who saw the vehicle coming from afar, had already started to shoot the camera between the stairs and the line going down to the beach. Ahmet and Tuğba coming out of the door of the vehicle door to the door of the organization when he saw the organization experienced shock on the shock.

Hand in hand with this organization prepared for him and Mr. Ahmet  selected a great melody entered. Miss Tuğba, who received red heart balloons prepared for her, could not keep her tears. Our photographer and cameraman friend, who wanted to capture every moment separately, started shooting closely and started to dance in front of the tent in the middle of the organization with this beautiful song. Here was the expected moment and towards the end of the song Ahmet and Tuğba kneeling in front of the lady, “Will you marry me,” asked the question. Miss Tuğba exclaimed  “Yes “ with her naive and excited tone.

The couple embraced each other and continued to dance with the songs and bird chirps. They then sat in the Indian tent on carefully prepared cushions and spent time at their wooden tables. Subsequently, they immortalized these moments by spending time in front of the decors and personalized decorations. We, as İzmir Organizasyon team, wish our young couple a lifetime of happiness and develop ourselves by signing new projects with our rightful pride. 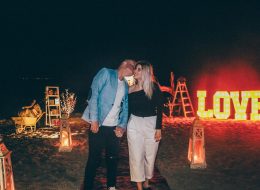 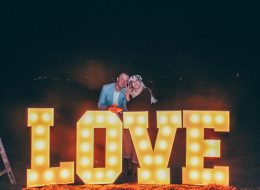 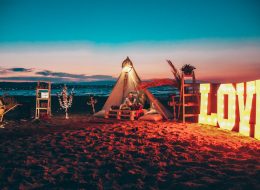 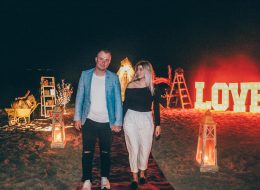 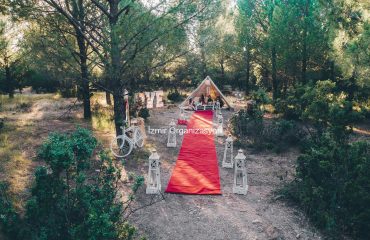 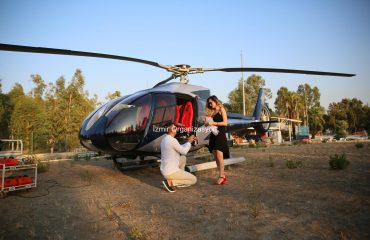 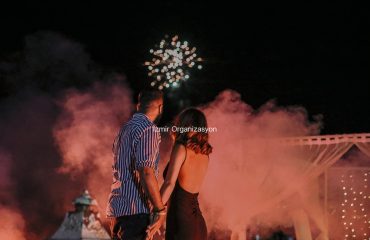 Marriage Anniversary Celebration On The Beach In Bodrum